For the Wolf (The Wilderwood #1) (Paperback) 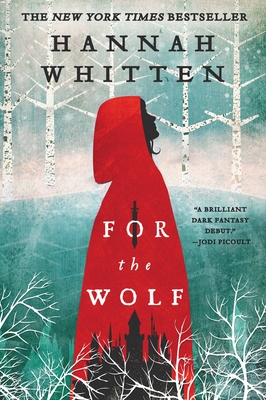 This is book number 1 in the The Wilderwood series.

The first daughter is for the Throne.


The second daughter is for the Wolf.

An instant NYT bestseller and word-of-mouth sensation, this dark, romantic debut fantasy weaves the unforgettable tale of a young woman who must be sacrificed to the legendary Wolf of the Wood to save her kingdom. But not all legends are true, and the Wolf isn't the only danger lurking in the Wilderwood.

As the only Second Daughter born in centuries, Red has one purpose—to be sacrificed to the Wolf in the Wood in the hope he'll return the world's captured gods.

Red is almost relieved to go. Plagued by a dangerous power she can't control, at least she knows that in the Wilderwood, she can't hurt those she loves. Again.

But the legends lie. The Wolf is a man, not a monster. Her magic is a calling, not a curse. And if she doesn't learn how to use it, the monsters the gods have become will swallow the Wilderwood—and her world—whole.

"If you ever wished Beauty and the Beast had more eldritch forest monsters and political machinations, this is the romance for you."―Alix E. Harrow, author of The Ten Thousand Doors of January

Hannah Whitten has been writing to amuse herself since she could hold a pen, and sometime in high school, she figured out that what amused her might also amuse others. When she's not writing, she's reading, making music, or attempting to bake. She lives in Tennessee with her husband and children in a house ruled by a temperamental cat.

"Drenched in atmosphere, with sharp and biting prose, Whitten’s For the Wolf is a glorious journey through woods deep and so very dark. A stunning debut."—Erin Craig, NYT bestselling author of House of Salt and Sorrows

“A brilliant dark fantasy debut. I loved it! I was completely swept away by the world-building, the characters, and the delicate gorgeousness of the writing.”—Jodi Picoult, New York Times bestselling author

“Eerie, earthy to its bones, and rife with elder magic. Hannah Whitten is one to watch.”—Anna Bright, author of The Beholder

"Atmospheric, folkloric, and half-familiar. If you ever wished Beauty and the Beast had more eldritch forest monsters and political machinations, this is the romance for you."—Alix E. Harrow, author of The Ten Thousand Doors of January

"Whitten weaves a captivating tale in this debut, in which even secondary characters come to feel like old friends. The novel seamlessly blends "Little Red Riding Hood" and "Beauty and the Beast" into an un-put-down-able fairy tale that traces the boundaries of duty, love, and loss. A masterful debut from a must-read new voice in fantasy."
—Kirkus

"Whitten debuts with a dark, dazzling reimagining of 'Little Red Riding Hood'... Whitten lovingly weaves in elements from other fairy tales, including 'Beauty and the Beast' and 'Snow White,' while crafting a story that is all her own. With clever, immersive prose and a subtle touch of horror, this is sure to enchant."—Publishers Weekly