A Little Hatred (The Age of Madness #1) (Paperback) 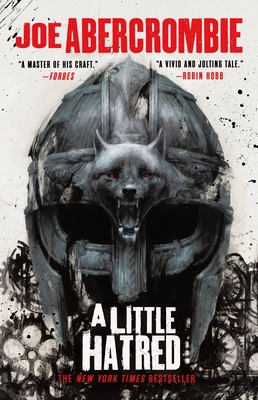 This is book number 1 in the The Age of Madness series.

The New York Times bestselling first book in Joe Abercrombie's The Age of Madness Trilogy where the age of the machine dawns, but the age of magic refuses to die. The chimneys of industry rise over Adua and the world seethes with new opportunities. But old scores run deep as ever. On the blood-soaked borders of Angland, Leo dan Brock struggles to win fame on the battlefield, and defeat the marauding armies of Stour Nightfall. He hopes for help from the crown. But King Jezal's son, the feckless Prince Orso, is a man who specializes in disappointments. Savine dan Glokta -- socialite, investor, and daughter of the most feared man in the Union -- plans to claw her way to the top of the slag-heap of society by any means necessary. But the slums boil over with a rage that all the money in the world cannot control. The age of the machine dawns, but the age of magic refuses to die. With the help of the mad hillwoman Isern-i-Phail, Rikke struggles to control the blessing, or the curse, of the Long Eye. Glimpsing the future is one thing, but with the guiding hand of the First of the Magi still pulling the strings, changing it will be quite another . . . For more from Joe Abercrombie, check out: The First Law SeriesThe Blade ItselfBefore They Are HangedLast Argument of Kings
Best Served ColdThe HeroesRed Country The Shattered Sea TrilogyHalf a KingHalf a WorldHalf a War

Joe Abercrombie was born in Lancaster in 1974, spent much of his youth in imaginary worlds, and left school with a good idea of how to make stuff up. After graduating from Manchester University he worked as a TV editor, but he never stopped making stuff up, and his first book, The Blade Itself, was published in 2006. He has since written eight more novels and a collection of stories in his First Law and Shattered Sea series. He lives in Bath with his wife Lou and their three children Grace, Eve and Teddy, and makes stuff up full-time.

"Abercrombie squeezes your heart till it matches his beat. No one writes with the seismic scope or primal intensity of Joe Abercrombie."—Pierce Brown, #1 New York Times bestselling author

"Abercrombie continues to do what he does best . . . Buckle your seat belts for this one . . . . A vivid and jolting tale."—Robin Hobb, New York Times bestselling author.

"Rife with emotion with wit to spare, both honed to an effortlessly fine edge. A Little Hatred is the joy of watching a master of the craft with his tools at their sharpest."—Sam Sykes, author of Seven Blades in Black

"A Little Hatred is Abercrombie at his very best: witty, wise, and whip-smart. Masterfully plotted . . . . I had high hopes for this book, and it exceed them all."—Nicholas Eames, author of Kings of the Wyld

"Brutal, unforgiving, and terribly fun. Everything awesome readers have come to expect from Joe Abercrombie."—Brian McClellan, author of Sins of Empire

"Joe Abercrombie's powerful voice raises the bar in any literary genre. Fantasy fans are beyond fortunate he chose this one."—Myke Cole, author of The Armored Saint

"Say one thing for Joe Abercrombie, say that he's a master of his craft."—Forbes

"Abercrombie unerringly juggles a large cast of multifaceted, morally ambiguous characters, each embroiled in their own complicated story."—Booklist (starred review)

"A Little Hatred may be the mostaccomplished work from a writer who many already consider a master."—SFF World

"Abercrombie examines the effects of social upheaval and the use and abuse of power through the viewpoints of a large cast, from kings, princes, warriors and seers to businessmen and women; the characterization is little short of brilliant. The plot is labyrinthine, with trademark Abercrombie twists and turns and reversals of fortune. He writes of slum life with graphic realism, and his rendering of battle scenes is to die for."—The Guardian

"[Abercrombie] might have his most important series of novels yet."—Locus

"Bold and authentically original."—Jeff VanderMeer on The Blade Itself

"If you're fond of bloodless, turgid fantasy with characters as thin as newspaper and as boring as plaster saints, Joe Abercrombie is really going to ruin your day. A long career for this guy would be a gift to our genre."—Scott Lynch on The Blade Itself

"Imagine The Lord of the Rings as directed by Kurosawa."—Lev Grossman, Wall Street Journal on The Heroes