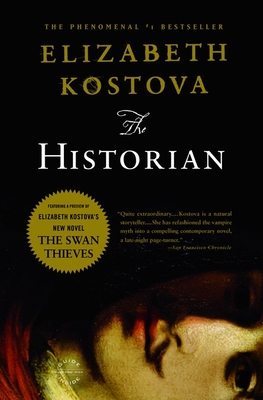 The record-breaking phenomenon from Elizabeth Kostova is a celebrated masterpiece that "refashioned the vampire myth into a compelling contemporary novel, a late-night page-turner" (San Francisco Chronicle).

Breathtakingly suspenseful and beautifully written, The Historian is the story of a young woman plunged into a labyrinth where the secrets of her family’s past connect to an inconceivable evil: the dark fifteenth-century reign of Vlad the Impaler and a time-defying pact that may have kept his awful work alive through the ages. The search for the truth becomes an adventure of monumental proportions, taking us from monasteries and dusty libraries to the capitals of Eastern Europe—in a feat of storytelling so rich, so hypnotic, so exciting that it has enthralled readers around the world.

“Part thriller, part history, part romance...Kostova has a keen sense of storytelling and she has a marvelous tale to tell.” —Baltimore Sun

Elizabeth Kostova is the author of the international bestseller The Historian. She graduated from Yale and holds an MFA from the University of Michigan, where she won the Hopwood Award for the Novel-in-Progress.

"In this smart retelling of the Dracula story, a young girl's discovery of a mysterious book, blank save for a sinister woodcut of a dragon, impels her father to divulge, reluctantly, details of his vampire-hunting days back in grad school. Halfway through his tale, which is told over several sessions in various atmospheric European locations, he vanishes. His daughter's quest to find him is interwoven with letters that reveal the past in full. Kostova's knowledge of occult arcana is impressive, and she packages her erudition in a graceful narrative that only occasionally lapses into melodrama. The structure-a story within a letter within a flashback-is an innovative complication, but it is soon shaken off by the swift-moving plot. Kostova never strays far from the conventions of the genre, and her historical thriller feels somewhat indebted to best-sellers of the recent past; there are Christian heresies, scholarly sleuths, and a malaprop-prone Eastern European guide. "—The New Yorker

"Quite extraordinary...Kostova is a natural storyteller...She has refashioned the vampire myth into a compelling contemporary novel, a late-night page-turner."—San Francisco Chronicle

"Part thriller, part history, part romance....Kostova has a keen sense of storytelling and she has a marvelous tale to tell."—Baltimore Sun

"Kostova's vampire is no campy Lugosi knockoff....Blending history and myth, Kostova has fashioned a version so fresh that when a stake is finally driven through a heart, it inspires the tragic shock of something happening for the very first time."—Newsweek