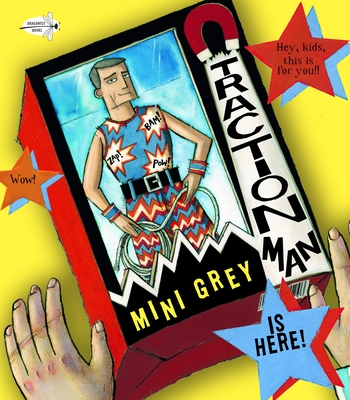 Traction Man—wearing combat boots, battle pants, and his warfare shirt—comes in a box, but very quickly finds the way into the imagination of his lucky boy owner. This superhero searches for the Lost Wreck of the Sieve as the boy makes a game of doing the dishes, and later in the bathtub, he conquers the Mysterious Toes that are stealing his pet, the brave little Scrubbing Brush. These are just a few of the action-packed adventures played out by the boy and his new toy that may not be able to leap tall buildings in a single bound, but can vanquish all manner of villains lurking around the house. Mini Grey’s story in words and pictures is an irresistible invitation to the private world of a child’s play.

Praise for The Very Smart Pea and the Princess-to-Be:

“A rib-tickling U.S. debut for Grey, with plenty of sight gags to complement the chatty narrative.”—Kirkus Reviews

“The Very Smart Pea and the Princess-to-Be delivers an entertaining spin and a great deal of visual wit.”—The Horn Book

MINI GREY is the creator of the Boston Globe-Horn Book Award-winning picture book Traction Man Is Here! and its sequel, Traction Man Meets Turbodog. The books received five and six starred reviews, respectively. Quirky, off-the-wall humor can also be seen in Three by the Sea, The Adventures of the Dish and the Spoon, Ginger Bear, and Jim, Who Ran Away from His Nurse and Was Eaten by a Lion.