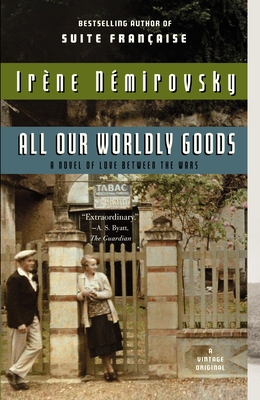 In haunting ways, this gorgeous novel prefigures Irène Némirovsky’s masterpiece Suite Française. Set in France between 1910 and 1940 and first published in France in 1947, five years after the author’s death, All Our Worldly Goods is a gripping story of war, family life and star-crossed lovers. Pierre and Agnes marry for love against the wishes of his parents and his grandfather, the tyrannical family patriarch. Their marriage provokes a family feud that cascades down the generations. This brilliant novel is full of drama, heartbreak, and the telling observations that have made Némirovsky’s work so beloved and admired.

Irène Némirovsky was born in Kiev in 1903 into a wealthy banking family and immigrated to France during the Russian Revolution. After attending the Sorbonne in Paris, she began to write and swiftly achieved success with David Golder, which was followed by more than a dozen other books. Throughout her lifetime she published widely in French newspapers and literary journals. She died in Auschwitz in 1942. More than sixty years later, Suite Française was published posthumously for the first time in 2006.

“A slender, elegant book which displays an unbroken respect for the resilience of the human spirit.”
—The Daily Mail

“Poignant. . . . A delicate and subtle study of lives swept up by forces beyond their control or understanding.”
—The Telegraph

“A remarkable novel. . . . Némirovsky’s voice, compassionate yet always shrewd, with its sharp portrait of France at war and during the optimistic and confused twenties and early thirties, is always distinctive.”
—Literary Review