A Song For Everyone: The Story of Creedence Clearwater Revival (Hardcover) 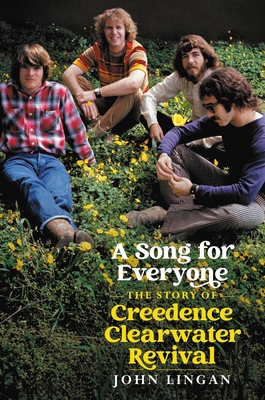 The definitive biography of Creedence Clearwater Revival, exploring the band's legendary rise to fame and how their music embodied the cultural landscape of the late '60s and early '70s

From 1969 to 1971, as the United States convulsed with political upheaval and transformative social movements, no band was bigger than Creedence Clearwater Revival. They managed a two-year barrage of top-10 singles and LPs that doubled as an ubiquitous soundtrack to one of the most volatile periods in modern American history, and they remain a staple of classic rock radio and films about the era. Yet despite their enduring popularity, no book has ever sought to understand Creedence in conversation with their time.

A Song for Everyone finally tells that story: the thirteen-year saga of an unassuming suburban quartet's journey through the wilds of 1960s pop, and their slow accrual of a sound and ethos that were almost mystically aligned with the concerns of decade's end. Starting in middle school, these Californian friends and brothers cut a working-class path through the most expansive decade in American music, playing R&B, country, and rock 'n' roll under a variety of names as each of those genres expanded and evolved. When they finally synthesized those styles under a new name in 1968, Creedence Clearwater Revival became instantly epochal, then fell apart under the weight of personal grievances that dated back to adolescence. As musicians and as men, they embodied the contradictions and difficulties of their time, and those dimensions of their career have never been explored until now.

Drawing on wide-ranging research into the social and musical developments of 1959-1972, extensive original interviews with surviving Creedence members and associates, and unpublished memoirs from people who knew the group closely, A Song for Everyone is the definitive account of a legendary and still-beloved American band. At the same time, it is also a cultural history of those same years—from Elvis to Altamont, Eisenhower to Watergate—seen through the eyes of four men who encapsulated them in song for all time, told by one of the rising figures in contemporary music writing.

John Lingan writes for publications including the New York Times Magazine, Washington Post, Pitchfork, and The Oxford American. He is also the author of Homeplace: A Southern Town, a Country Legend, and the Last Days of a Mountaintop Honky-Tonk, and lives in Maryland with his wife and three children.

"...[C]ritics have tended to characterize John Fogerty as a songwriter foretelling nothing but doom... Such gloomy characterizations weren’t wrong, but Lingan explains much of C.C.R.’s appeal with a simple reminder: melody and groove matter, too... Perhaps the time has even come when we can see C.C.R. for the innovators they were to begin with."—New Yorker

“Diagnosing the push-and-pull of John Fogerty’s unnavigable conflicts—between populism and artistic sophistication, control and collaboration—is where A Song for Everyone is at its best."—Wall Street Journal

“Lingan provides an impressively detailed history of both the band and the East Bay music scene of the era.”—Variety

"A Song for Everyone will be greatly appreciated by Creedence and Fogerty fans for further insight into the band whose music seems to be everywhere, but whose story has been far less ubiquitous."—Houston Press

"...[T]he dramatic undercurrent in John Lingan's story-line bubbles up to the surface with understated but nonetheless unmistakable intensity."—All About Jazz

"Well-researched... [Lingan] does a fine job of weaving the CCR story through American cultural history of the their era, helping to bring the tale to life for the reader and widen its scope."—Vinyl District

“Accurate and authoritative…the writing is exceptional when dealing with the purely musical aspects of the group’s career…The book is at its best when Lingan is rapturously breaking down and describing some of CCR’s best-loved hits with a fanatic’s eye and ear for detail.” —Winnipeg Free Press

"[A] frankly excellent book... What John Lingan has done with this book is restore the rightful position of Creedence Clearwater Revival as one of the great American bands. By focusing on the political background to their rise to popularity, and refusing to pay too much attention to the personal issues and internal spats that eventually brought them down, he has ensured that their music, and it’s importance to its time, is front and centre throughout the pages of what is as much social history and social commentary as it is the biography of a band. Previous books about the band have come down on one side or the other in the 'whose fault was the break up' debate. With this telling of the story of Creedence Clearwater Revival, John Lingan may well have written a book for everyone."—Americana UK

“John Lingan's A Song for Everyone is a well-written and fascinating account of the convoluted history of one of rock’s most successful bands. Surprising and thoroughly engrossing.”—Richard Thompson, musician and author of Beeswing

“Creedence Clearwater Revival rose with the Sixties and collapsed soon after that decade folded. Set against the tumultuous events of those years, John Lingan’s evocative and deftly written portrait of this beloved but often misunderstood band beautifully proves the way in which art, history and people are often bound together.” —David Browne, author of Crosby, Stills, Nash & Young

“A Song for Everyone is a historical masterwork. It's the story of a band whose music can, at a glance, appear perfectly calibrated for universal adoration. But Lingan's biography of Creedence Clearwater Revival meticulously documents how this fame was hard-won. Theirs was a sound and fury forged in the fires of the Vietnam War.”
—Elon Green, author of Last Call

"Like the best Creedence songs, John Lingan's A Song For Everyone reads like it was in your head before you even picked it up. Lingan has composed a work of serious reportage, tremendous insight, and most of all, killer storytelling. This is a book for everyone."—Eric Nusbaum, author of Stealing Home