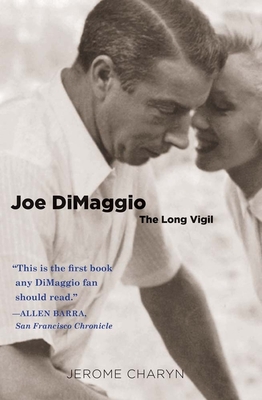 This riveting study of Joe DiMaggio offers a more sympathetic look at his life beyond the baseball field, a reversal of how the legendary sports icon has been portrayed in recent years

As the New York Yankees' star centerfielder from 1936 to 1951, Joe DiMaggio is enshrined in America's memory as the epitome in sports of grace, dignity, and that ineffable quality called "class." But his career after retirement, starting with his nine-month marriage to Marilyn Monroe, was far less auspicious. Writers like Gay Talese and Richard Ben Cramer have painted the private DiMaggio as cruel or self-centered. Now, Jerome Charyn restores the image of this American icon, looking at DiMaggio's life in a more sympathetic light.

DiMaggio was a man of extremes, superbly talented on the field but privately insecure, passive, and dysfunctional. He never understood that for Monroe, on her own complex and tragic journey, marriage was a career move; he remained passionately committed to her throughout his life. He allowed himself to be turned into a sports memorabilia money machine. In the end, unable to define any role for himself other than "Greatest Living Ballplayer," he became trapped in "a horrible kind of minutia." But where others have seen little that was human behind that minutia, Charyn in Joe DiMaggio presents the tragedy of one of American sports' greatest figures.

Jerome Charyn is the author of The Secret Life of Emily Dickinson and The Seventh Babe, a novel about a white third baseman on the Red Sox who also played in the Negro Leagues.

"This is the first book any DiMaggio fan should read."—Allen Barra, San Francisco Chronicle
— Allen Barra

"Jerome Charyn applies his considerable skills as a novelist to exploring the gnawing mysteries surrounding a man who 'was brutal in his devotion to the game.'"—Sam Roberts, New York Times
— Sam Roberts

"If you are a sports fan, a Marilyn fan or just really enjoy a book that makes you think, you will enjoy Joe DiMaggio: The Long Vigil... This is an extraordinary telling of Joe the man."—Leslie Wright, Seattle Post Intelligencer, Blogcritics.org
— Leslie Wright

"Accessing the moments and memories of a bygone era and a time of spectacular achievements, Jerome Charyn has delved into the mystery of Joe DiMaggio and brought him to life."—Leslie Wright, Seattle Post Intelligencer, Blogcritics.org
— Leslie Wright

“Jerome Charyn is one of the most important writers in American literature and one of only three now writing whose work makes me truly happy to be a reader." — Michael Chabon

“Charyn […] is an American treasure….  Among this book’s virtues are brilliant passages of impassioned writing, […] and Charyn’s mastery of the popular culture in which baseball legends belong and thrive.”—Neil D. Isaacs, author of The Great Molinas and  All the Moves

“This book has captured DiMaggio’s centrality in American popular culture at midcentury—how he became an American icon, how he wrestled with his celebrity, how he constructed stunted and complex personal relationships, especially with his fellow icon Marilyn Monroe.”—Aram Goudsouzian, author, King of the Court: Bill Russell and the Basketball Revolution

"An intimate and compassionate meditation on DiMaggio which, while elegantly dissecting his genius on the field, does him the equally important honor of placing no more on his shoulders than he can reasonably bear. Charyn reminds us that everything about DiMaggio was extraordinary, including his limitations."—David Margolick, author, Beyond Glory: Joe Louis vs. Max Schmeling, and a World on the Brink.

“Charyn […] is an American treasure…The richness of his imagination, the variety and volume of his fictive worlds, […] and the prodigious illumination of character through dialogue, are all part of his accomplishment. In a distinguished book editor’s pet phrase, ‘he writes like an angel.’ His psychological acumen is revealed virtually throughout his corpus, not by a belaboring of analysis but by a defining moment, a salient tic, a self-revealing turn of phrase. […] Among this book’s virtues are brilliant passages of impassioned writing, […] and Charyn’s mastery of the popular culture in which baseball legends belong and thrive.”—Neil D. Isaacs, author of The Great Molinas and  All the Moves

"Jerome Charyn's meditation on Joe DiMaggio elegantly explores what DiMaggio meant to America and the price he paid for making it all look so damn easy."—Randy Roberts, Distinguished Professor of History, Purdue University

“Jerome Charyn has not only written a superb book about a sports legend but, more to the point, he brilliantly informs us that even the icons among us must navigate emotionally and intellectually through the obstacles of expectations, achievements and disappointments that we all encounter.  Charyn presents us with more than a sports book.   This is a classic drama we can all relate to.  You'll enjoy and remember this book.”—Robert K. Tanenbaum, author of Betrayed

". . . an intriguing, plausible take on this notoriously opaque hero."—Kirkus Reviews

"Jerome Charyn, a distinguished novelist, brings a sympathetic imagination to a man whose talents seemed limitless on the field and death-choked off it."—Martin Levin, Globe and Mail
— Martin Levin

"[An] elegantly written and moving book. . . . This slender, nuanced mini-biography is as brilliant a piece of writing as I have ever read, with prose that is poetic, with a deep understanding of and feeling for DiMaggio."—Charles Stephen, Lincoln Journal Star
— Charles Stephen

“….the book will give pleasure to those who fill with fever when baseball season is upon us.”—Molly McCloskey, Irish Times
— Molly McCloskey

Read a post by Jerome Charyn on the romance of Joe DiMaggio and Marilyn Monroe on the Yale Press Log
— http://goo.gl/C8Ku5S