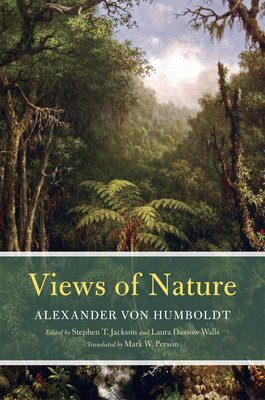 While the influence of Alexander von Humboldt (1769–1859) looms large over the natural sciences, his legacy reaches far beyond the field notebooks of naturalists. Humboldt’s 1799–1804 research expedition to Central and South America with botanist Aimé Bonpland not only set the course for the great scientific surveys of the nineteenth century, but also served as the raw material for his many volumes—works of both scientific rigor and aesthetic beauty that inspired such essayists and artists as Emerson, Goethe, Thoreau, Poe, and Frederic Edwin Church.

Views of Nature, or Ansichten der Natur, was Humboldt’s best-known and most influential work—and his personal favorite. While the essays that comprise it are themselves remarkable as innovative, early pieces of nature writing—they were cited by Thoreau as a model for his own work—the book’s extensive endnotes incorporate some of Humboldt’s most beautiful prose and mature thinking on vegetation structure, its origins in climate patterns, and its implications for the arts. Written for both a literary and a scientific audience, Views of Nature was translated into English (twice), Spanish, and French in the nineteenth century, and it was read widely in Europe and the Americas. But in contrast to many of Humboldt’s more technical works, Views of Nature has been unavailable in English for more than one hundred years. Largely neglected in the United States during the twentieth century, Humboldt’s contributions to the humanities and the sciences are now undergoing a revival to which this new translation will be a critical contribution.

Stephen T. Jackson is professor emeritus of botany and ecology at the University of Wyoming. He lives in Tucson, AZ.

Laura Dassow Walls is the William P. and Hazel B. White Professor of English at the University of Notre Dame. She is the author most recently of Henry David Thoreau: A Life, also published by the University of Chicago Press.

Mark W. Person is associate academic professional lecturer in German in the Department of Modern and Classical Languages and director of the language lab at the University of Wyoming. He lives in Laramie, WY.

“From the plains of Venezuela to volcanoes and waterfalls, von Humboldt combines observations with travel narratives and philosophical musings. Annotations really help provide a context to the essays; this work also includes an index, conversions for von Humboldt’s various measurement units, an introduction, and preface. This excellent translation of one of von Humboldt’s most important works should introduce this great naturalist to an entirely new audience.”
— Edward J. Valauskas, Curator of Rare Books, Library, Chicago Botanic Garden

“Despite von Humboldt’s tremendous influence on many of the world’s greatest writers and naturalists, including Goethe, Darwin, Emerson, and Thoreau, outside of specialist circles, this new translation has not received the attention it richly deserves. This is something I intend to do my part in helping to rectify at the earliest opportunity.”
— John E. Riutta

“It is easy to overlook the work of the translator in reviewing a translation—a fate keenly felt by some of the learned women who slogged away at turning Humboldt’s French and German prose into English in the nineteenth century. Person is to be warmly congratulated on a highly readable translation that loses nothing of the complexity of the original. I consider his “Translator’s Note” a fundamental part of the translation itself, not only because it reminds us of his essential mediating role in the production of a truly modern rendering of Humboldt’s work. The issues that he addresses—sensibility to Humboldt’s style and sentence structure, idiosyncrasies and outdated terms in the original—confront us in a very immediate way with the business of transforming one series of ideas and images into a different language, culture, and, in this case, time. As scholars working in Humboldt studies gear up for commemorations in honor of the 250th anniversary of Humboldt’s birth in 2019, this new edition of the Ansichten der Natur will prove an invaluable basis for further discussion and research.”
— Isis

“Long awaited by Humboldtians, this illuminating new edition of Views of Nature—offering not just vivid natural scenes (‘views’ in the most obvious sense) but also von Humboldt’s still-fresh views on the significance of nature and its study—is a gift that transcends disciplines and even history. A book that was deeply relevant and constructively challenging in the age of empire has become even more necessary in the age of climate change. Today, thanks in part to the acutely sensitive translator and editors, von Humboldt’s finest one-volume work comes across as a perfect blend of art and science, a paean to interconnection that is both humbling and heartening.”
— Aaron Sachs, Cornell University

“Alexander von Humboldt’s wide-ranging Views of Nature is a masterpiece of nineteenth-century natural history, at once science and art. Mark W. Person’s stunning new translation makes the wonders of this classic accessible to the English-language world of the present.”
— Daniel Walker Howe

“Ever since his celebrated journey of exploration of the Americas, Alexander von Humboldt has been a defining figure of Western scientific culture. Today, his international reputation is enjoying a revival, especially in North America. Now the University of Chicago Press is adding to its list of Humboldtiana a new edition of von Humboldt’s most readable book, Views of Nature, skillfully translated from the original German and expertly introduced. It opens up to a twenty-first-century readership the magnificent panorama of tropical American landscapes, the aesthetic pleasure of which connoted—in von Humboldt’s view—the underlying harmony of lawlike unity that pervades the cosmos.”
— Nicolaas Rupke, Washington and Lee University