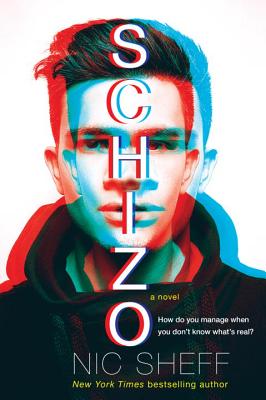 By Nic Sheff
Hard to find: allow 24 hours for information

The fascinating, shocking, and ultimately quite hopeful story of one teen’s downward spiral into mental illness by the bestselling author of Tweak and son of David Sheff (author of Beautiful Boy, the memoir adapted into a movie of the same name starring Steve Carell and Timothée Chalamet).

Miles is the ultimate unreliable narrator—a teen recovering from a schizophrenic breakdown who believes he is getting better . . . when in reality he is growing worse.

Driven to the point of obsession to find his missing younger brother, Teddy, and wrapped up in a romance that may or may not be the real thing, Miles is forever chasing shadows. As Miles feels his world closing around him, he struggles to keep it open, but what you think you know about his world is actually a blur of gray, and the sharp focus of reality proves startling.

Written by Nic Sheff, son of David Sheff (author of Beautiful Boy, the memoir adapted into a movie of the same name starring Steve Carell and Timothée Chalamet), Schizo is the fascinating, and ultimately quite hopeful, story of one teen's downward spiral into mental illness as he chases the clues to a missing brother. Perfect for fans of Thirteen Reasons Why, The Perks of Being a Wallflower, and It’s Kind of a Funny Story.

“This spare book is a well-written, but painful, read, as readers come to understand the hopelessness Miles feels about his life and his future.”—VOYA

“In his first novel, memoirist Sheff (Tweak) provides an insightful perspective on one teen’s struggle with mental illness.”—Publishers Weekly

Nic Sheff is a columnist for The Fix and the author of two memoirs about his struggles with addiction, the New York Times-bestselling Tweak: Growing Up on Methamphetamines and We All Fall Down. He also wrote for the hit TV series The Killing. Nic lives in Los Angeles, California. Follow @nic_sheff

As a teenager and young adult I struggled with drug and alcohol addiction, as well as severe mental illness issues—bipolar disorder, depression, psychosis. My first two books were memoirs about my experience battling addiction. For my first novel, I wanted to continue my exploration of psychological issues within the framework of a thriller. When two of my family’s friends, both high-schoolers, were diagnosed with schizophrenia, I began researching the illness. Apparently this disease, which often lies dormant in teens, has been surfacing earlier and earlier in those with a genetic predisposition to the illness after these kids try smoking pot—because our pot is so much stronger than it ever has been. I wanted to examine what happens to someone who experiences the symptoms of schizophrenia while still a teenager, someone trying to balance the hardships of mental illness at such a fragile time of life—the everyday struggles of high school and relationships. Much of the novel is borrowed from my own experience, but it is also a departure. I hope it shows that mental illness is not a death sentence.

Gr 9 Up–Sheff’s novel reveals the painful and confusing world of teenage schizophrenia through the experience of Miles, a junior at a small San Francisco private school, where his mother works as a librarian. Miles’s few friends only barely understand his struggle to hold on to reality, a tenuous grasp maintained through a dizzying array of pills and the love of his family. Miles is consumed by guilt at the kidnapping or death of his little brother Teddy on the same day he had his first extreme breakdown in a beach bathroom. Two years before, Miles believes, he destroyed his family. Now he believes that if he can just track down Teddy, he can restore their happiness and perhaps move forward himself. His plan is complicated by the return of Eliza, a close childhood friend whom he came to love and who rebuffed him just before her family moved away for two years. She missed his diagnosis and tentative re-entry to high school, plagued by the effects of his medication and suffering through frequent visits to a psychiatrist his family can’t really afford. Now that she might actually return his feelings for her, Miles is distracted by Eliza when he needs to focus on Teddy’s kidnapper. His visions of menacing crows and some questionable decisions indicate that Miles may be falling deeper into mental illness. Readers fascinated by the dark side of the human mind in realistic fiction will enjoy this deft portrayal of a brain and a life spiraling out of control. Miles is an endearing character whose difficult journey will generate compassion and hope. -- School Library Journal

Included in CNN.com's roundup of "new titles to feed your YA addiction"

“Readers fascinated by the dark side of the human mind in realistic fiction will enjoy this deft portrayal of a brain and a life spiraling out of control. Miles is an endearing character whose difficult journey will generate compassion and hope.” –School Library Journal

“[T]he crafting of the plot and the convergence of the different storylines keeps pages turning. Schizo is a thrilling read for teens.” –VOYA

"[A] heartbreaking story, but particularly important in the climate around mental illness today." –Bustle.com

"[A] heartbreaking story, but particularly important in the climate around mental illness today."--Bustle.com