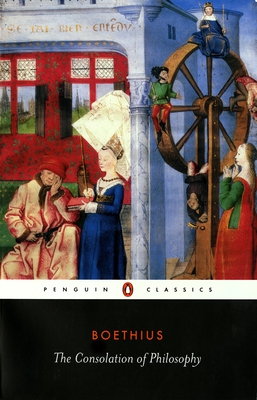 Boethius was an eminent public figure under the Gothic emperor Theodoric, and an exceptional Greek scholar. When he became involved in a conspiracy and was imprisoned in Pavia, it was to the Greek philosophers that he turned. The Consolation was written in the period leading up to his brutal execution. It is a dialogue of alternating prose and verse between the ailing prisoner and his 'nurse' Philosophy. Her instruction on the nature of fortune and happiness, good and evil, fate and free will, restore his health and bring him to enlightenment. The Consolation was extremely popular throughout medieval Europe and his ideas were influential on the thought of Chaucer and Dante.

Ancius Boethius (c. A.D.480-524) was a Roman philosopher and is considered one of the last authentic representatives of the classical world, in both his life and writings. It is through Boethius' translations that the knowledge of Aristotle has survived in the West.

Victor Watts read Classics and English at Merton College Oxford. He is Master of Grey College and part-time Senior Lecturer in the School of English and Linguistics at Durham University.