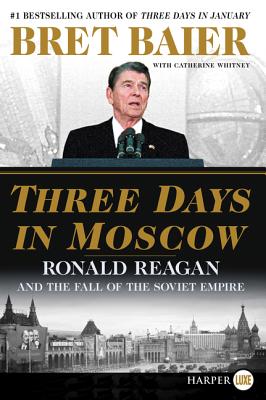 "An instant classic, if not the finest book to date on Ronald Reagan.” — Jay Winik

President Reagan's dramatic battle to win the Cold War is revealed as never before by the #1 bestselling author and award-winning anchor of the #1 rated Special Report with Bret Baier.

Moscow, 1988: 1,000 miles behind the Iron Curtain, Ronald Reagan stood for freedom and confronted the Soviet empire.

In his acclaimed bestseller Three Days in January, Bret Baier illuminated the extraordinary leadership of President Dwight Eisenhower at the dawn of the Cold War. Now in his highly anticipated new history, Three Days in Moscow, Baier explores the dramatic endgame of America’s long struggle with the Soviet Union and President Ronald Reagan’s central role in shaping the world we live in today.

On May 31, 1988, Reagan stood on Russian soil and addressed a packed audience at Moscow State University, delivering a remarkable—yet now largely forgotten—speech that capped his first visit to the Soviet capital. This fourth in a series of summits between Reagan and Soviet General Secretary Mikhail Gorbachev, was a dramatic coda to their tireless efforts to reduce the nuclear threat. More than that, Reagan viewed it as “a grand historical moment”: an opportunity to light a path for the Soviet people—toward freedom, human rights, and a future he told them they could embrace if they chose. It was the first time an American president had given an address about human rights on Russian soil. Reagan had once called the Soviet Union an “evil empire.” Now, saying that depiction was from “another time,” he beckoned the Soviets to join him in a new vision of the future. The importance of Reagan’s Moscow speech was largely overlooked at the time, but the new world he spoke of was fast approaching; the following year, in November 1989, the Berlin Wall fell and the Soviet Union began to disintegrate, leaving the United States the sole superpower on the world stage.

Today, the end of the Cold War is perhaps the defining historical moment of the past half century, and must be understood if we are to make sense of America’s current place in the world, amid the re-emergence of US-Russian tensions during Vladimir Putin’s tenure. Using Reagan’s three days in Moscow to tell the larger story of the president’s critical and often misunderstood role in orchestrating a successful, peaceful ending to the Cold War, Baier illuminates the character of one of our nation’s most venerated leaders—and reveals the unique qualities that allowed him to succeed in forming an alliance for peace with the Soviet Union, when his predecessors had fallen short.

Bret Baier is the chief political anchor for Fox News Channel and the anchor and executive editor of Special Report with Bret Baier, seen five days a week on Fox News Channel. Before assuming the anchor role, Bret served as Chief White House Correspondent for Fox News Channel between 2006 and 2009. Prior to being named Chief White House Correspondent for Fox News Channel, Bret served as National Security Correspondent based at the Pentagon, reporting on military and national security affairs, as well as on defense, military policy and the intelligence community from 2001 to 2006. He reported from Iraq twelve times and Afghanistan thirteen times. In his career Bret has traveled the world with various administration dignitaries and military officials, reporting from seventy-four countries. He is the author of the New York Times bestsellers Three Days in Moscow: Ronald Reagan and the Fall of the Soviet Empire, Three Days in January: Dwight Eisenhower's Final Mission, and Special Heart: A Journey of Faith, Hope, Courage and Love. He lives with his family in Washington, DC.

Catherine Whitney has written or collaborated on more than twenty-five books, including Framing a Life: A Family Memoir with Geraldine Ferraro and Guilty: The Collapse of Criminal Justice with the late Judge Harold J. Rothwax.

“Forceful. … It is curious how many Reaganesque themes find a contemporary echo… [and] it is worth recalling both Reagan’s celebration of freedom and his understanding of democracy.”
— Wall Street Journal

“Bret Baier has done it again. Three Days in Moscow is a remarkable story about one of the most monumental moments in contemporary world history. Grand in sweep, brilliantly crafted, and riveting, this extraordinary book is also masterfully researched. It will take its place as an instant classic, if not as the finest book to date on Ronald Reagan.”
— JAY WINIK, author of 1944 and April 1865

“Bret Baier’s Three Days in Moscow is a riveting recounting of Ronald Reagan’s gallant Cold War diplomacy. ... Every page sparkles. ... One of the best and most essential books ever written about Reagan.”
— DOUGLAS BRINKLEY, Professor of History at Rice University and editor of The Reagan Diaries

“From someone who covered all of Ronald Reagan’s summits, Three Days in Moscow is a fascinating read. Bret Baier’s enthralling new history is a timely reminder at a point of resurgent US-Russian tensions of the historic role Ronald Reagan played in negotiating landmark nuclear agreements that helped end the Cold War.”
— ANDREA MITCHELL, Chief Foreign Affairs Correspondent, NBC News

“Bret Baier is not only among the most reliably honest and professional journalists in America, he is also a brilliant historian and author. ... A comprehensive and wonderfully written exposition of Ronald Reagan’s lifelong mission to spread liberty and to end the Soviet Union.”
— MARK R. LEVIN, #1 New York Times bestselling author

“Bret Baier gives us a clear and lively picture of Ronald Reagan, the man and the president. Read Three Days in Moscow, enjoy, and learn why the Gipper was such a great leader.”
— GEORGE P. SHULTZ, U.S. Secretary of State, 1982-1989

“A remarkable book on many levels. Three Days in Moscow may make you see Ronald Reagan for the first time.”
— MARLIN FITZWATER, White House Press Secretary, 1987-1993

“In Bret Baier’s uplifting Three Days in Moscow we learn of a critical new chapter in the Reagan triumph over totalitarianism, a place and time where a new vision of freedom for all people was born. An engaging story well told by a professional with insight and empathy.”
— WILLIAM BENNETT, U.S. Secretary of Education, 1985 - 1988

“[A] satisfying handling of what was arguably the highlight of Reagan’s time as president.”
— San Antonio Express-News