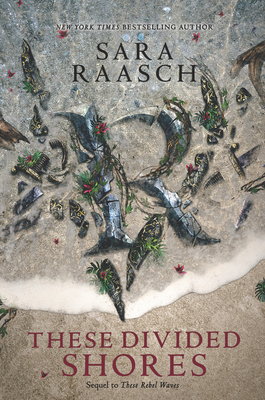 A thrilling sequel to These Rebel Waves—full of deadly magic, double crosses, and a revolution—from Sara Raasch, the New York Times bestselling author of the Snow Like Ashes series. Perfect for fans of Shannon Hale, Leigh Bardugo, and Marissa Meyer.

As a child, she committed unforgivable acts to free Grace Loray from King Elazar of Argrid. Now Elazar’s plan to retake the island has surpassed Lu’s darkest fears: He’s holding her and his son, Ben, captive in an endlessly shifting prison, forcing them to make a weapon that will guarantee Elazar’s success.

Escape is impossible—unless Lu becomes the ruthless soldier she hoped never to be again.

Vex failed to save Lu and Ben—and that torments him as much as his Shaking Sickness. With the disease worsening, Vex throws himself into the rebellion against Argrid. The remaining free armies are allied with the stream raider syndicates—and getting them to cooperate will take a strength Vex thought burned on a pyre six years ago.

Imprisoned, betrayed, and heartbroken, Ben is determined to end his father’s rampage. Watching Elazar sway the minds of Grace Loray as he did those of Argrid, Ben knows he has to play his father’s game of devotion to win this war. But how can a heretic prince defeat the Pious God?

Sara Raasch has known she was destined for bookish things since the age of five, when her friends had a lemonade stand and she tagged along to sell her hand-drawn picture books too. Not much has changed since then: her friends still cock concerned eyebrows when she attempts to draw things, and her enthusiasm for the written word still drives her to extreme measures. She is the New York Times bestselling author of the Snow Like Ashes series, These Rebel Waves, and These Divided Shores. You can visit her online at www.sararaaschbooks.com and @seesarawrite on Twitter.

Praise for THESE REBEL WAVES: “An action-packed political thriller filled with betrayal, plot twists, and touches of romance.”
— Booklist

Praise for THESE REBEL WAVES: “Magic, politics, and religion collide in unexpected ways in this action-packed fantasy adventure.”
— Kirkus Reviews

Praise for THESE REBEL WAVES: “Full of mesmerizing magic, political intrigue plotted in dark grottos, and a cast of sharp-witted rogues, These Rebel Waves swashbuckled its way into my heart and never let go. Raasch has outdone herself with this new series. You won’t want to put it down.”
— Evelyn Skye, New York Times bestselling author of The Crown’s Game and The Crown’s Fate

Praise for ICE LIKE FIRE: “Will have readers awaiting the third book and hoping that it brings Meira and her people peace at long last.”
— Kirkus Reviews

Praise for ICE LIKE FIRE: “Hard-core fantasy fans will eat this up and clamor for the conclusion.”
— School Library Journal

Praise for ICE LIKE FIRE: “Lush and poetic”
— Booklist

Praise for ICE LIKE FIRE: “Will have readers needing the next one, now.”
— Voice of Youth Advocates (VOYA)

Praise for SNOW LIKE ASHES: “Snow Like Ashes is a thrilling story with unforgettable characters set in a stunning fantasy world that had me quickly turning pages. I want more!”
— Morgan Rhodes, New York Times bestselling author of Falling Kingdoms

Praise for SNOW LIKE ASHES: “The plot and writing are superlative...Highly recommended.”
— School Library Journal

Praise for SNOW LIKE ASHES: “A satisfying read.”
— Kirkus Reviews

Praise for SNOW LIKE ASHES: “An enjoyable adventure-romance.”
— Publishers Weekly

Praise for SNOW LIKE ASHES: “A new society, a grand adventure, and a first romance, all rolled into one big fantasy epic.”
— Booklist