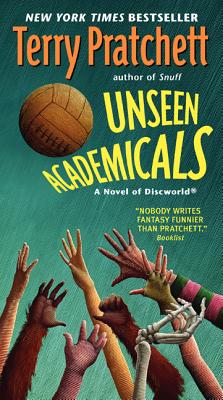 This is book number 37 in the Discworld series.

The wizards at Ankh-Morpork's Unseen University are renowned for many things—wisdom, magic, and their love of teatime—but athletics is most assuredly not on the list. So when Lord Vetinari, the city's benevolent tyrant, strongly suggests to Archchancellor Mustrum Ridcully that the university revive an erstwhile tradition and once again put forth a football team composed of faculty, students, and staff—or lose the funding that pays for their nine daily meals—the wizards of UU find themselves in a quandary. To begin with, they have to figure out what it is that makes this sport of foot-the-ball so popular with Ankh-Morporkians of all ages and social strata. Then they have to learn how to play it. Oh, and on top of that, they must win a football match without using magic.

“In short, this is as busy and as daft as any other Discworld yarn, which means it is the quintessence of daft. Nobody writes fantasy funnier than Pratchett.” — Booklist

“At its heart, this is an intelligent, cheeky love letter to football, its fans and the unifying power of sports. — Publishers Weekly

“This account of Unseen University’s entry into the world of soccer (or, as they occasionally call it, “foot-the-ball”) pushes past the usual conventions of satire to offer equal parts absurdist philosophy and heartwarming romance....A witty addition to the long-running fantasy series” — Kirkus Reviews

“Thirty-seven books in and ... Discworld is still going strong...and doing so with undimmed, triumphant exuberance. ” — The Guardian

“It’s a triumphant effort” — The Independent on Sunday