The New Republic: A Novel (Paperback) 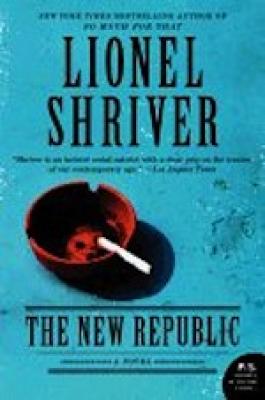 “Shriver is an incisive social satirist with a clear grip on the ironies of our contemporary age . . . [Her] take on journalism and international politics is wry, insightful and just over the top enough to be fun.” —Los Angeles Times

New York Times bestselling author Lionel Shriver probes the mystery of charisma in a razor-sharp novel that teases out the intimate relationship between terrorism and cults of personality, explores what makes certain people so magnetic, and reveals the deep frustrations of feeling overshadowed by a life-of-the-party who may not even be present

Ostracized as a kid, Edgar Kellogg has always yearned to be popular. A disgruntled New York corporate lawyer, he's more than ready to leave his lucrative career for the excitement and uncertainty of journalism. When he's offered the post of foreign correspondent in a Portuguese backwater that has sprouted a homegrown terrorist movement, Edgar recognizes the disappeared larger-than-life reporter he's been sent to replace, Barrington Saddler, as exactly the outsize character he longs to emulate. Infuriatingly, all his fellow journalists cannot stop talking about their beloved "Bear," who is no longer lighting up their work lives.

Yet all is not as it appears. Os Soldados Ousados de Barba—"The Daring Soldiers of Barba"—have been blowing up the rest of the world for years in order to win independence for a province so dismal, backward, and windblown that you couldn't give the rat hole away. So why, with Barrington vanished, do terrorist incidents claimed by the "SOB" suddenly dry up?

A droll, playful novel, The New Republic addresses weighty issues like terrorism with the deft, tongue-in-cheek touch that is vintage Shriver. It also presses the more intimate question: What makes particular people so magnetic, while the rest of us inspire a shrug? What's their secret? And in the end, who has the better life—the admired, or the admirer?

Lionel Shriver's fiction includes The Mandibles; Property; the National Book Award finalist So Much for That; the New York Times bestseller The Post-Birthday World; and the international bestseller We Need to Talk About Kevin, adapted for a 2010 film starring Tilda Swinton. Her journalism has appeared in the Guardian, the New York Times, the Wall Street Journal, and many other publications. She’s a regular columnist for the Spectator in Britain and Harper’s Magazine in the US. She lives in London and Brooklyn, New York.

“[Shriver’s] whip-smart observations—about relationships, the role of the media, the cult of personality are funny and on the mark.” — People

“In her latest novel, Lionel Shriver pays homage to Joseph Conrad—examining terrorism, media bloodlust, and the cult of personality through an unexpected lens of satire.” — Marie Claire, Four New Page-Turners to Keep Bedside

“A very funny book, but the laughs are embedded in a deeply disturbing subject.” — NPR, "Weekend Edition"

“Shriver is cursed with knowing the human animal all too well. The New Republic is satire of a Shriver kind, that is to say biting.” — Miami Herald

“Lionel Shriver, the author of the harrowing and patient We Need to Talk About Kevin, delivers something altogether different: a callous and romping political and journalistic satire.” — The Daily Beast-- This Week's Hot Reads

“Shriver is one of the sharpest talents around.” — USA Today

“Witty, caustic and worldly, [Shriver] is a raconteur who could show even Barrington Saddler a thing or two about entertaining a crowd.” — Wall Street Journal

“The dialogue zings and the writing is jazzy. . . . [Shriver] can toss off a sharp sketch of a passing character in a phrase, and she’s got a gimlet eye for what’s phony, or affected, or even touchingly vain in human behavior.” — Entertainment Weekly

“Shriver is an incisive social satirist with a clear grip on the ironies of our contemporary age . . . [Her] take on journalism and international politics is wry, insightful and just over the top enough to be fun.” — Los Angeles Times

“Part Scoop, part Our Man in Havana and part Len Deighton thriller, Shriver’s novel is not just about terrorism but also about journalism and the nature of charisma. . . . Shriver’s Barba is a wonderful creation.” — Financial Times