Londoners: The Days and Nights of London Now--As Told by Those Who Love It, Hate It, Live It, Left It, and Long for It (Paperback) 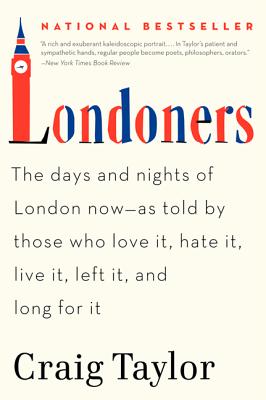 Londoners is a fresh and compulsively readable view of one of the world's most fascinating cities–a vibrant narrative portrait of the London of our own time, featuring unforgettable stories told by the real people who make the city hum.

Acclaimed writer and editor Craig Taylor has spent years traversing every corner of the city, getting to know the most interesting Londoners, including the voice of the London Underground, a West End rickshaw driver, an East End nightclub doorperson, a mounted soldier of the Queen's Life Guard at Buckingham Palace, and a couple who fell in love at the Tower of London—and now live there. With candor and humor, this diverse cast—rich and poor, old and young, native and immigrant, men and women (and even a Sarah who used to be a George)—shares indelible tales that capture the city as never before.

Together, these voices paint a vivid, epic, and wholly original portrait of twenty-first-century London in all its breadth, from Notting Hill to Brixton, from Piccadilly Circus to Canary Wharf, from an airliner flying into London Heathrow Airport to Big Ben and Tower Bridge, and down to the deepest tunnels of the London Underground. Londoners is the autobiography of one of the world's greatest cities.

Craig Taylor is the author of Return to Akenfield and One Million Tiny Plays About Britain, both of which have been adapted for the stage. He is also the editor of the literary magazine Five Dials. He lives in London.

“Remarkable. . . . Essential. . . . Enlightening. . . . Londoners offers an impression of the city’s people, a way to understand their motives and fears and the simmering rush. It captures the combination of quiet desperation and boundless optimism required to live [there].”
— San Francisco Chronicle

“Engaging. . . . A treasury of compact vignettes from voices that are rarely heard but come closer to the truth of the city than any travel brochure or official document.”
— Pittsburgh Tribune-Review

“A thrilling portrait of the city. . . . Enchanting. . . . I feel I almost learned more about Londoners from this book than from being a Londoner for more than four decades. . . . Too good to miss.”
— Oona King, The Times (London)

“The best book about London in at least a decade. . . . Masterful. . . . A cracking and insightful read [that] will still be widely enjoyed 50 years from now. Treat yourself . . . you really are investing in a classic.”
— Londonist.com

“Fans of Studs Terkel’s insightful oral histories will be delighted to discover a successor in Taylor. . . . His book brings London to life as it is—ever changing, ever eternal, ever unforgettable. A delight!”
— Library Journal (starred review)

“An epic portrait in eighty voices that shows the city to be just [as] Dickensian as it has ever been.”
— David Nicholls, bestselling author of One Day

“Londoners is a wonderful book—I wanted it to be twice as long.”
— Diana Athill, bestselling author of Somewhere Towards the End

“Samuel Johnson said, ‘When you are tired of London, you’re tired of life.’ Craig Taylor is tired of neither London nor life, and this book is a gorgeous, utterly irresistible—even addictive—ode to both.”
— David Shields, bestselling author of The Thing About Life Is That One Day You'll Be Dead and Reality Hunger

“Ambitious [and] creative. . . . A book to deepen your relationship with London and make you fall in - or out - of love with it all over again. . . . I can’t tell you how much I enjoyed it.”
— Lucy Worsley, author of If Walls Could Talk

“Craig Taylor is the real deal: a peerless journalist and a beautiful craftsman. He’d be a household name already if he wasn’t so modest. He’ll be one anyway in due course.”
— David Rakoff, bestselling author of Fraud and Half Empty