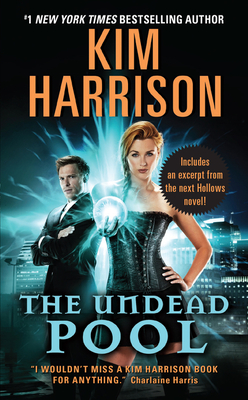 This is book number 12 in the Hollows series.

Witch and day-walking demon Rachel Morgan has managed to save the demonic ever-after from shrinking, but at a high cost. Now, strange magic is attacking Cincinnati and the Hollows, causing spells to backfire or go horribly wrong, and the truce between the Inderlander and human races is shattering. Rachel must stop this dark necromancy before an all-out supernatural war breaks out.

Rachel knows of only one weapon to ensure the peace: ancient elven wild magic, which carries its own perils. And no one knows better than Rachel that no good deed goes unpunished . . . .

“A great ride in and of itself, rather than simply a buildup to the finale, which is sure to be whiz-bang.” — Kirkus Reviews (starred review)

“Readers who have followed this series will be overjoyed to have Trent and Rachel finally deal with their complicated history and chemistry.” — Library Journal

“There’s a general sensation of closure and imminent climax as Harrison maneuvers toward the end, and patient readers are promised a substantial payoff.” — Publishers Weekly

“The world-building is complex and solid....and the cast of characters is immensely engaging. The Undead Pool doesn’t disappoint.” — Tor.com

“Longtime fans will find their emotions running the gamut, as events for many of Harrison’s familiar characters take new and sometimes tragic turns this time around. Rachel’s journey of self-discovery is hard, frightening and definitely life-threatening; it also makes for fantastic entertainment!” — Romantic Times BOOKclub

“The world-building is incomparable” — Fresh Fiction