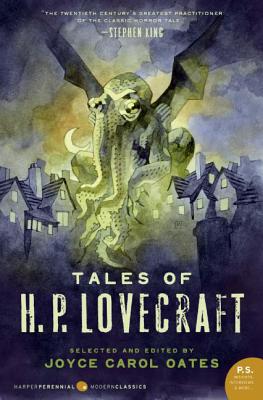 HPL, the author largely responsible for making me the delinquent I am today.  Here are his most iconic and accessible works presented by the distinguished Joyce Carol Oates, a long time devotee and fan.  If you haven't read him, check out the author who many consider to be one of the most influential horror and sci-fi writers of all time.

When he died in 1937, destitute and emotionally as well as physically ruined, H. P. Lovecraft had no idea that he would one day be celebrated as the godfather of modern horror. A dark visionary, his work would influence an entire generation of writers, including Stephen King, Clive Barker, Neil Gaiman, and Anne Rice. Now, the most important tales of this distinctive American storyteller have been collected in a single volume by National Book Award-winning author Joyce Carol Oates.

In tales that combine the nineteenth-century gothic sensibility of Edgar Allan Poe with a uniquely daring internal vision, Lovecraft fuses the supernatural and mundane into a terrifying, complex, and exquisitely realized vision, foretelling a psychically troubled century to come. Set in a meticulously described New England landscape, here are harrowing stories that explore the total collapse of sanity beneath the weight of chaotic events—stories of myth and madness that release monsters into our world. Lovecraft's universe is a frightening shadow world where reality and nightmare intertwine, and redemption can come only from below.

Joyce Carol Oates is a recipient of the National Medal of Humanities, the National Book Critics Circle Ivan Sandrof Lifetime Achievement Award, the National Book Award, and the PEN/Malamud Award for Excellence in Short Fiction, and has been several times nominated for the Pulitzer Prize. She has written some of the most enduring fiction of our time, including the national bestsellers We Were the Mulvaneys, Blonde, which was nominated for the National Book Award, and the New York Times bestseller The Falls, which won the 2005 Prix Femina. Her most recent novel is A Book of American Martyrs. She is the Roger S. Berlind Distinguished Professor of the Humanities at Princeton University and has been a member of the American Academy of Arts and Letters since 1978.