The Oxford American presents its 20th annual Southern Music Issue, featuring more than twenty-five stories exploring the history and legacy of North Carolina music. The issue comes with a 28-song sampler CD of recordings by North Carolinians sourced across nearly a century. Among the many notable contributors to this year’s Southern Music Issue are novelists Jonathan Lethem, Jill McCorkle, and Wiley Cash, and the beloved North Carolina musicians Rhiannon Giddens and Tift Merritt. Tryon-native Nina Simone, one of the most important artists of the twentieth century, graces the cover in a portrait by Jim Blanchard; Simone is the subject of a feature essay about artistic influence and identity, written by poet Tiana Clark.

The CD compilation highlights music from NC legends like Simone, Thelonious Monk and John Coltrane, Earl Scruggs and Doc Watson, James Taylor, and Elizabeth Cotten, plus a wide-ranging host of others. Accompanying the sampler are detailed liner notes and essays on the songs by Ron Rash, Laura Ballance, Randall Kenan, and others. 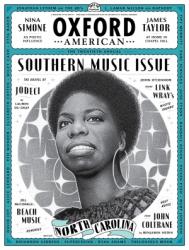