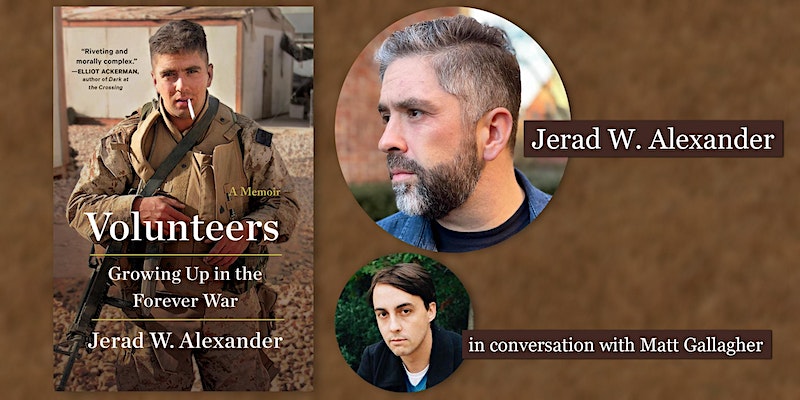 In conversation with Matt Gallagher, author of Youngblood and Empire City.

The memoir of a young man from a long line of enlisted men and women, raised on military bases and shaped from a young age to idolize and glorify war and the people who fight it. After he joins the Marines and serves in Iraq, he must begin to reckon with the troubled and complicated truths of the American war machine.

With courage and raw power, Alexander brings to the fore vital questions: Is America in fact exceptional? Are the "bad guys" actually easy to identify? And most important, are our causes always just?

This powerful debut helps readers understand the violent and self-replicating mythology of American patriotism, from the eloquent perspective of an enlisted man—not some elite warrior, but a simple volunteer.

Jerad W. Alexander has written for Esquire, Rolling Stone, The Nation, Narratively, and elsewhere. He holds an MFA in Literary Reportage from the New York University Arthur L. Carter School of Journalism. From 1998 to 2006, he served as a U.S. Marine, deploying to the Mediterranean, East Africa, and Iraq. He grew up on military bases, from the east coast of the United States to Japan.

Matt Gallagher is a Wake Forest graduate and US Army veteran. He holds an MFA in fiction from Columbia and has written for The New York Times, The Atlantic, Esquire, and The Paris Review.

Volunteers: Growing Up in the Forever War (Hardcover)

“Riveting and morally complex, Volunteers is not only an insider’s account of war.

From the author of Youngblood comes a “brilliant and daring” (Phil Klay, award-winning author of Redeployment) novel following a group of super-powered soldiers and civilians as they navigate an imperial America on the precipice of a major upheaval—for fans of The Fortress of Solitude and The Plot Against America.